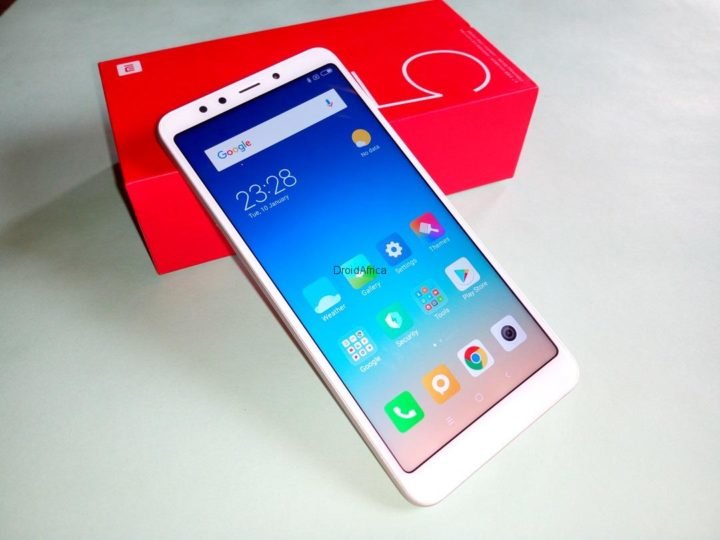 While Xioami is a well know smartphone maker in countries like China, India and even some of the Western countries, the company is still a big stranger to many smartphone user in the entire African continent. Although, I have seen recent efforts by Xioami to make it products available in some African countries like South Africa, Nigeria, Botswana and Malawi, via some third party dealers. Sadly only mid-range and rather aged Mi devices are available via the above means. Well, all thanks to GearBest.com for sending us a unit of the Xiaomi Redmi 5 for review.

So here are the highlights of the Xiaomi Redmi 5 smartphone

Xiaomi Redmi 5 Full Review: All You Need to Know About Redmi 5

The Xiaomi Redmi 5 features a metal unibody with the trending 18:9 display aspect ratio. The screen is a 5.7-inch IPS display, with a 1440 x 720 HD+ resolution, similar to what you have on the Tecno Camon CM and the Infinix Hot S3.

You get a front facing 5-megapixel camera, a front facing soft flash, the speaker grill and the ambient sensor just above the display. The right hand side carries the power button and the volume rocker, while a 3.5mm audio jack, and IR blaster and a noise cancelling secondary microphone are kept overhead the phone.

Only a Hybrid SIM trail is kept to the left hand side of the device, but at the basement, you get what looks like a dual Loud speaker set up (one opening carries the speaker, while the second host the Primary Mic), and the USB 2.0 port.

At the back, you get a protruded 13-megapixel main camera, a single LED flash and a fingerprint sensor just below it. Nothing else at the back, aside the MI logo and some network certifications.

Design wise, the device is of course taller than previous Redmi series, considering it 5.7-inch display. But if you are coming from a 5.5 display like the Redmi Note series, then you are surely going to notice how slim the Redmi 5 is.

The smartphone feels very comfortable to hold with it 2.5D curved edges at the front and back. However, I’m not a fan of protruded rear cameras on a smartphone, and of which the Xiaomi Redmi 5 is a big victim, thanks to Gearbest for the included TPU silicon case.

The Display is a 5.7-inch HD+ display with an IPS LCD panel. It has 1440 x 720 pixel, resulting to 282 Pixel Per Inch. Interestingly, Xiaomi decided to cover the entire front panel with a Corning Gorilla Glass, aimed at preventing scratches on the screen. The phone maintains a very thing bezel on it four sides, resulting to about 76% screen to body ratio. Now as for display quality, 18:9 aspect ratio is currently the best in the mobile industry, and as you would expect, the Xiaomi Redmi 5 is not an exception. The phone produces very bright and well saturated colors that users will not struggle using even under bright sunny days. However, I still find the display on the Ulefone Mix 2 to be a little better than the display on this device. While the display is nothing to complain about, the Ulefone Mix 2 tend to produce better and richer colors than the Xiaomi Redmi 5.

The device comes with reading mode built-in which becomes effective when the auto brightness is turned on. What this does is to crash the display brightness to under 50 Nits, especially when using the smartphone at night. The purpose of this is to;

However, I do always leave the auto brightness disabled when I’m indoor because the reading mode is too aggressive in my opinion, making the display too deem in indoor use As a matter of facts, Xiaomi have always stood with Qualcomm, using Snapdragon CPUs in almost all of it smartphones, from the more premium Xiaomi Mi Mix 2 powered by a Qualcomm Snapdragon 835 SoC, to mid-range smartphones like the Redmi 5. Now, how mid-range is the Redmi 5 smartphone?

Powering the device is the aforementioned Qualcomm Snapdragon 450 octa-core processor clocked at 1.8Ghz. This processor is a 64-bit chip, built on a 14nm architecture. It is netted together with Qualcomm in-house Adreno 506 GPU, along with 3GB RAM and 32GB internal storage. The device runs on MIUI Global stable version 9.2 based on Android 7.1.2 Nougat. Of course, Snapdragon 450 processor is not a top-notch in the industry, but combining it with MIUI V9 based on Android 7.1 helped the Redmi 5 to be smooth and fluid in operation. The protecting Gorilla glass also help add such a smooth, slippery feel, giving the device the feels and operations of high end smartphones.

Navigating through demanding web pages was not much a problem for this device. The Adreno 506 GPU was able to handle all the graphical games I tested on this device without any issue. Please click here for a detailed gaming and performance test on the Redmi 5. As for the OS, MIUI is one of the most customizable user interface in the entirety of Android ecosystem. Almost every single aspect of the phone is customizable. You can customize the behaviors of the power button and volume rockers, as well as the behaviors of the onscreen navKeys, and if you love seeing different display skin on your smartphone, then you can safely dive into MIUI thousand of custom skins and displays, which can be downloaded directly from MIUI theme store.

The OS also supports dual app features. This feature allows you to have a single app with dual functionality on your device. For example, you can have dual WhatsApp applications, which allows you to use two different accounts simultaneously, without logging out of any. The OS comes with all Google apps pre-loaded including Play Store, which allows users to install apps of their choice from Google store. As mentioned before, the device is fluid and smooth. Even under heavy use, you hardly notice lags and hangs, but sadly, I do still get some Google apps like Google services, force closing with errors. The camera app is a customized Xiaomi camera which retains almost similar functionalities with standard Android camera apps, but with different interface.

The camera comes with multiple features such Panoramic mode, HDR and Beauty effects pre-loaded. You can take burst shot by pressing and holding the volume button, and the device can still allow you to capture images simultaneously while shooting a video.

As for the camera quality, well, you’ll get a bit more than what you pay for. Yeah, you’ll surely get great camera output so long as you stay away from low light shots.

That doesn’t mean that low light shots are totally miserable, but I’ll prefer sticking with full daylight shots. And to buttress my point, check out the images below.

At first when I brought out the Redmi 5 out of it box, I was kinda excited thinking that the device is got dual base speakers, but no, it just a single speaker at the base, but designed with two speaker opening, with the second opening hosting a the primary Mic. But the good news is, despite hosting a single speaker, the sound output is so rich that you’ll have absolutely nothing to complain about. As a matter of fact, if you ask me to pick out an aspect of this device that I like the most, I think the loud speaker is going to top the chart.

The speaker produce very clear sound with enough mid and low, resulting to a notable bass. The sound is also pretty loud, and even when playing an audio track or even playing a movie with 100% volume, I did not notice any distortion at all. Yes, the Tecno Camon CM have great sound output, but since the arival of the Redmi 5, I stopped listenng to musics on the CM.

The rich sound experience on the Redmi 5 did not stop just at the loud speaker. Even with a cheap earbud, you can still enjoy decent sound on the Redmi 5 far more than you would on phones within same price tag. So this smartphone should be the delight of multimedia consumers looking for something more pocket friendly.

The only challenge you might have is when using the device in landscape mode, say when watching a movie, you could get the loud speaker muffled, which is a major issue of all smartphone with base speakers.

Xiaomi decided to ship the Redmi 5 with a 3300mAh battery, which is somewhat a downgrade in battery size compare to what we saw on the preceding Redmi 4, which boost a larger 4100mAh battery. This might be a turn-off for some, but trust me, even if you are going to have an issue with the Redmi 5, the battery wont be the issue.

I easily get through 48 hours of moderate use, yet with some juice to spare. But days I decides to get heavy on the phone, the maximum I do get, is a full day use, which is still impressive. But what happens when you run out of juice? Well, you get a 5V-2A charger which is able to push the 3300mAh battery to 100% real fast.

Apple will throttle the performance of your old iPhone, in order to encourage you to buy newer Apple iPhone. But that is not same with Xiaomi. In spite of how good the Redmi 4 was, Xiaomi was still able to add so much improvement and value to the Redmi 5 that will make owners of Redmi 4 wants to upgrade without throttling the performance of their phones. Talking about improvements, I am talking about:

So in my opinion, if your smartphone budget falls around $120, and you are looking for a more frugal processor and fast OS to power your daily smartphone needs, you can confidently trust the Qualcomm Snapdragon 450 in the Redmi 5 to do that for you.