Vivo iQOO Neo with Snapdragon 855 which was launched in China back in October last year is about to get a successor, and this time, the device won’t be coming with 60Hz display refresh rate like other variants of iQOO smartphone series. In fact, it won’t even pack 90Hz or 120Hz refresh rate, but will come with 144Hz display refresh rate, which is the first of it kind from iQOO mobile phones, all will be called iQOO Neo 3. 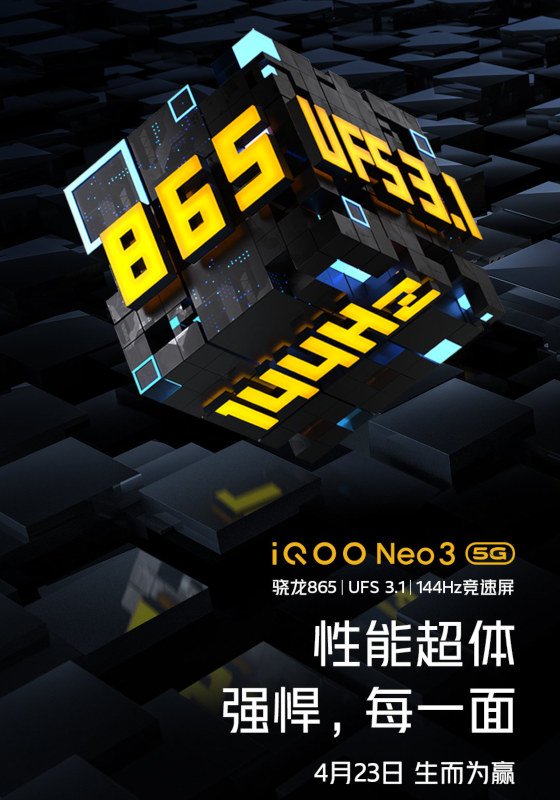 Earlier this February, iQOO 3 smartphone was announced, but like the others, it came with 60Hz refresh rate as well. Now, the iQOO Neo 3, will not only have a higher 144Hz refresh rate, but will also come with 5G network like the earlier version. This came as an official announcement from the company, while confirming at the same time that the device will be announced on the 23rd of April.

Base on what we’ve known before now, the iQOO Neo 3 5G will come powered by the Qualcomm Snapdragon 865 processor which will bring both standalone (SA) and non-standalone (NSA) 5G support to the device. The phone will also be equipped with UFS 3.1 storage technology under the hood.

iQOO Neo 3 base model will have 6GB of RAM and 128GB of storage, while the higher variant is expected to pack upto 8GB RAM and 256GB internal storage. The phone will run FunTouch OS 10 based Android 10.

For the camera, it is rumored to come with a 48-megapixel quad camera setup, and could house a 4500mAh battery with 44W fast charging support. Launched date is 23rd of April, and we hope to find out more before then.