iTel P37 Pro is the higher variant of P37, and the direct upgrade to the P36 Pro LTE version of last year. About upgrade, the P37 Pro is offering a larger display, and as the name suggests, it is 4G LTE capable as well. The model sports a 6.8-inches IPS screen with 720 x 1640 pixels resolution, while a dewdrop seat above the display. Under the hood, the P37 Pro is powered by an octa-core 1.6GHz UNISOC SC9863A CPU pegged with PowerVR GE8322 GPU. The model has 2/3GB RAM and 32/64GB of expandable internal storage. For the software, iTel is still retaining Google Android 10 (Go Edition) out of the box. As for the camera setup, you are getting dual sensors on the rear, and a single snapper upfront. The rear module includes a 13-megapixel primary lens along with a secondary AI sensor, while a single 8-megapixel selfie snapper is used in the notch upfront. The device supports dual Nano-SIM with 4G LTE network, and available in Gradation Blue, Gradation Sea Blue and Gradient Green. You are also getting a fingerprint scanner on the rear, a 5000mAh battery and the aforementioned Google Android 10 (Go Edition) out of the box. The table below contains the full specifications and features of iTel P37 Pro. 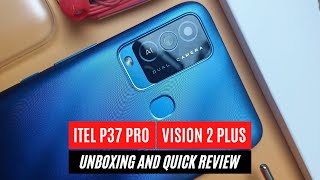 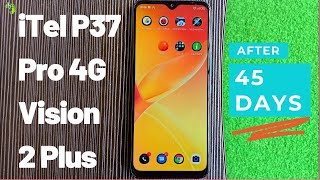 I have carefully and thoroughly gone through the contents of this phone and l can categorically say that this phone is awesome, amazing, mind-blowing, glamorous and super.
I can’t wait to have it as soon as possible.
The Ram, Rom,battery,camera,android version,network,screeen size, etc is rich.

So how much is the 37pro in Ghana here if I may please ask ?

It should have come with 10w fast charge

How can I be a distributor of such an amazing product.

can i have wholesale prices

I want to buy pls anyone brief me about the phone

How much is the standard model I stay in Port Harcourt

How good is the front camera, so many compliants about it not being good, what do you have to say please
Kindly reply

I love the phone and I want to buy it , hope the 3gb is out

Please when will the 3gb pro model be out

The 3GB RAM variant is currently available in some Asian countries as Vision 2 Plus. It is not in Africa yet, but I’m sure iTel will bring it when the 2GM variant starts selling like Hot Cake!

Thanks so much
I pray they do it quickly sha cause I really need the 3gb ram model.

But Sir you’re the best. You do the best reviews in Nigeria. I only use other websites to double-check

I tried reaching out to two major phone sales outlets in Benin City of the cost of this p37 pro, but I was told that it’s not available. Please where can I get it? And what’s the cost?

You can try checking on slot.ng

Pls ekpa is the 3gb ram,64 gb rom model out in nigeria?if yes was the price

Greetings to you all my fellow itel fans and lovers
Please I will like to also know about the price here in Togo, firstly the 2gb of ram then comes to the. 3gb ram.

Good I like the big battery,the dual camera s at the rear and the 3 gb RAM l also like the 64 gb internal memory fantastic for me

Does the p37 pro come with front flash, notification light, and please does it not come with the 4g band 3 and band 27?

No front flash or notification led… But there is soft light from the screen at dark times aiding face unlock.

HOW LONG IS IT LIKELY TO LAST

Alright…I’ll try to create a news update about that. But you need to ensure you are subscribed to our website push notification so you can get notified about that update!

Please how many hours does it take to charge up the itel p37 pro?

Comment:its sad it has no fast charge
hope it sells at not note than 48k.

i want to by my own please how good this
is

We received the phone yesterday, and our unboxing preview will be published soon, just stay tuned!

Pls how much is the phone, and where can I get it in Lagos State

iTel P37 Pro is not currently available. But the standard model is around 39K