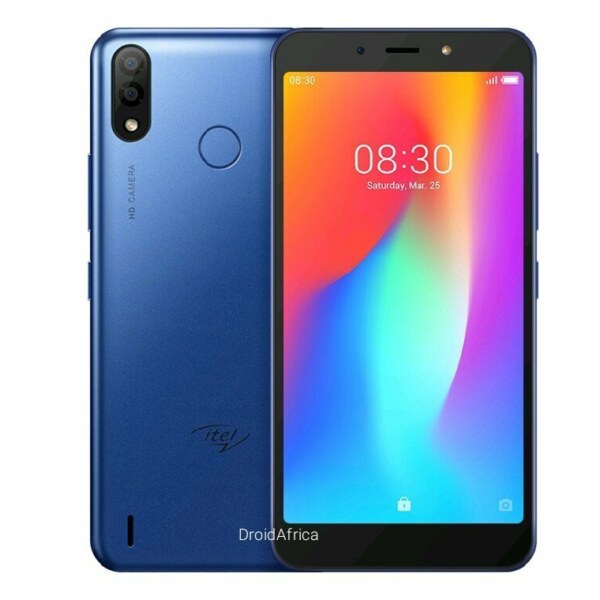 The iTel P33 is the latest smartphone from iTel Mobility. The device comes in a 5.5-inch HD+ Display, with 720 x 1440 pixels resolution. The major selling point of the iTel P33 is the built-in 4000mAh battery, which should be able to easily take you through a full day of use or more. The device also has a Plus version, which has a 6.0 inch screen, and a larger 5000mah battery. The iTel P33 is the successor of last year’s P32. But this unit comes with a redesign vertical ccamera placement, similar to the iTel S33 mobile phone. The rear camera is a combination of an 8 + 0.8 megapixel sensors, while a single 5 megapixel selfie camera seats upfront.

iTel was able to squeeze some Artifical Intelligence (AI) features (like Bokeh and FaceID) into the P33, but don’t expect 100% level of accuracy as on a more powerful devices like the Infinix Zero 6 or even the Tecno Camon 11. Aside FaceID, there’s also a rear placed fingerprint scanner, which iTel claims can perform 8 different tasks on the device, such as unlocking the device, answering calls, taking photo shots among others. Specification wise, the device is powered by a Quad-core Spreadtrum SC7731E CPU which means; the iTel P33 does not have support for 4G LTE network. Along with the CPU, there’s an ARM Mali T820 MP1 graphic processor, 1GB of RAM and a 16GB internal storage, expandable up to 32GB via SD card. As mentioned above, the selling point of this device is the presence of a 4000mAh battery. Combining this battery capacity with Google Android Go edition is far enough to get you through 24 or even 48 hours of continuous usage. The detail specification and other silent features of the iTel P33 are itemized in the table below.

I purchased itel p33 and I'm really
enjoying it.

Itelp33, I bought it on the 16th of April, and I noticed that the phone always get hot and the battery does not last, it giving me headache seriously

Debby, wow..was this you two years ago when your phone was just bought? It’s Kevin. I was just browsing the internet and I saw this. If it’s you then it’s a coincidence..you know you bought yours in 2019. But your phone doesn’t overheat anymore..it didn’t when I used and charged it .

Phone Always hot when used , front camera poor, front flash not bright exspecally at dark place. Back camera flash is too whitish when you use it at night but okay at day time. Front camera in video is even darker at night. I prefer p32 front camera and flash light to this p33. Love itel but I wish I could be given another phone in swap of this.

Battery is okay..fast operating..but was thinkin if they would provide changing font facility becoz recent brands do that and how come a new model cant…fascinatin ryt?

Can someone please teach me how to use the flashlight both front and back? Thanks

Please I just bought a new itel p33.and the network type is just 2G indicated by E on the network bar which makes it very slow when it comes to Internet. Please how do I get it to 3G as said by MTN. Because have tried but can’t see the option. Please help.

Yes, It’s good phone Itel P33 but it has no screenshot tool.

It has. May be you’ve not notice it. Press the power on botton and the volume button together.

I need help I swaped my sim .now am having private protection password problems

the phone worth it price am enjoying it…

Go to your gallery and swipe down
Was this helpful?

I’ve been using itel p33 for the past 3months and never gave me any problem. The phone is good and durable

The iTel P33 is good device that is for battery lovers

It’s a good phone no doubt with that. I wanted to ask if anyone has figured out how you view items you placed on Private Space? Thank you

Go to gallery, click on albums, then swipe down, you will input your password or finger print to open

CAN I PLAY DREAM LEAGUE ON ITEL P33?

The best way to find out is by trying. So give it a try!

What do you mean y ‘baar the background’?

Use the portrait feature

Just tap on the object u want to snap

How do I access the private files of p33

You can get the pro version of Itel p33 plus with more battery capacity of 5000mAh and screen size of 6.0 inch on Jumia – Buy it here

can i use face detection to unlock the phone instead of finger print?

My network is too poor