The launch of the upcoming Samsung Galaxy M51 could happen any time soon. The device has appeared couple of times, both via certification site and official site. And now, Samsung is teasing the-soon-to-be announced M51 as the meanest monster.

Even though the Galaxy M51 is said to rock similar specifications with the Galaxy A71, one obvious thing that could make Samsung to tag the M51 as the meanest monster is surely the rumored battery capacity. Oh yes, the device is said to pack a gigantic 7000mAh battery with 25W fast charging out of the box.

As for the specifications, we are expecting a 6.67-inches 60Hz Super AMOLED display with 1080 x 2400 pixels resolution, 420 nits of brightness and a dot-notch upfront. The device is equipped with a Qualcomm Snapdragon 730 octa-core SoC pegged with Adreno 618 GPU, 6/8GB RAM and upto 128GB of built-in storage.

Forget what you have always believed. All-new #SamsungM51 is the most power-packed monster we have ever created. That’s why we are calling it the #MeanestMonsterEver. Get notified on Amazon. https://t.co/0v9pVPhUys#GalaxyM51 pic.twitter.com/DDTAzJFm4p

The camera specifications of the device highlight a familiar rectangular hump of quad-camera setup at the back with 64 MP main lens + 12 MP ultra-wide lens + 5 MP depth sensor and a 5 MP macro shooter along with an LED flash, while a single 32 MP front camera lens will take care of selfies. 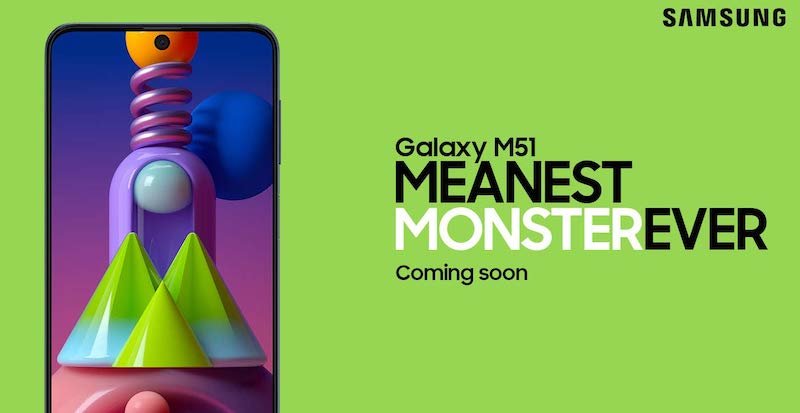 It will equally come with a side-mounted fingerprint scanner, and will run on the Android 10 operating system based OneUI 2.5. It will be available in two color options of White and Black, and will measure 163 x 78 x 8.5 (mm), have thin bezels all around except for the bottom, and weighs 213 grams.