Google has announced it’s Pixel series smartphone, the Pixel 4 and the Pixel 4 XL in New York, sadly, the Pixel 4 series will not be launched in India, if you have been waiting for the Pixel 4 and Pixel 4 XL to arrive in India and also curious to test out the said camera hype, so sorry, this device unavailability in India has been confirmed by the company.

I know you would say, “why?” ok i will tell you why, the Pixel 4 series uses a motion sense tech which lets you wave your hands to control certain aspects of the phone, such as skipping songs and silencing phone calls, however, the motion sense tech relies on 60GHz mmWave frequency band which requires Government approval and India has not yet opened it up for commercial application. So that’s why it won’t be launching in India, Google confirmed this to publications in India in a statement below.

“Google has a wide range of products that we make available in different regions around the world. We determine availability based on a variety of factors, including local trends, and product features. We decided not to make Pixel 4 available in India. We remain committed to our current Pixel phones and look forward to bringing future Pixel devices to India,” said Google’s spokesperson.” For the specifications of Pixel 4, It comes with a 5.7-inch OLED display, it’s a Full HD+ display which means it has a resolution of 2280 by 1080 pixels, this device is not a tall device in any way, it’s a 19:9 aspect ratio device which has a PPI Density of 444, the display is also protected by Corning Gorilla Glass 5. The back panel of the phone has glass layer (mind you, no dual-tone finish this time) for wireless charging with camera cut-out at the top-left corner and a 90Hz refreshed rate.

Under the hood, it is powered by Snapdragon 855 Chip which has an Octa core processor clocked at 2.8GHz, it runs on Android 10 and Adreno 640 for graphics or gaming. The processor is also paired with a 6gb/6GB RAM and 64GB/128GB internal storage. The smartphone will be offered in three colour options which include Clearly White, Just Black and Oh So Orange

The Pixel 4 XL on the other hand has the same specs as the Pixel 4 only that the Pixel 4 XL now comes with a 6.3 inches QHD+ resolution and a larger 3,700mah battery, nothing more, other specs remains the same. 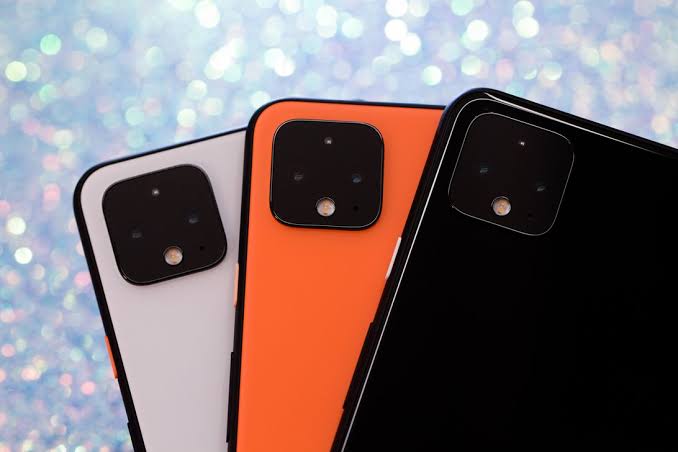