Just as promised, Huawei has officially introduced the Mate X2, successor to the Mate Xs of last year. The new Mate X2 brings a sharp changes to it folding implementation different from the previous generation Mate X-series. Huawei have opted for in-ward folding, instead of the outward folding on the predecessors.

This is similar folding mechanism on the Galaxy Fold-series from Samsung. So instead of the single screen which folds a section backward on the older model, the new Huawei Mate X2 comes with two full fledged screens: the larger 8-inches display remains inside when folded, then switching displays to the secondary 6.45-inches and vice versa. 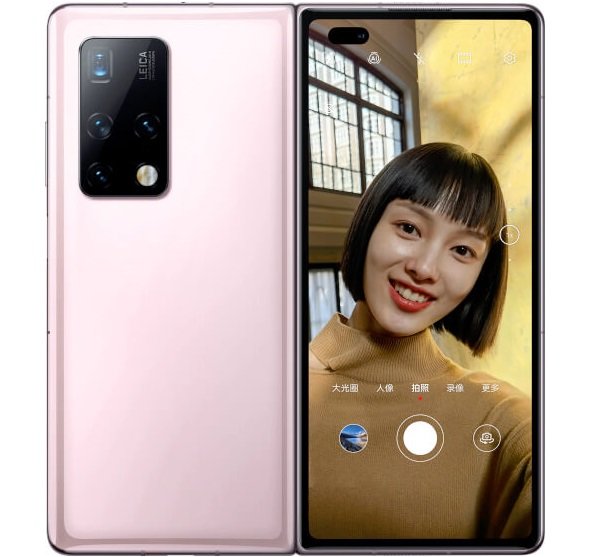 The Mate X2 is all about screen, so let talk more about it: The larger unfolded 8-inches display come with 2480 x 2200 pixels resolution, using 8:7.1 aspect ratio, while the smaller 6.45-inches display display has 2700 x 1160 pixels, using 21:9 tall aspect ratio. Both screens are OLED panel, and both come with 90Hz refresh rate.

The inner larger screen has DCI-P3 color rendering as well as 180Hz touch sampling rate, while the out screen misses on on DCI-P3, but come with a higher 240Hz sampling rate, and pill-notch to the top left corner, which houses dual selfie cameras. 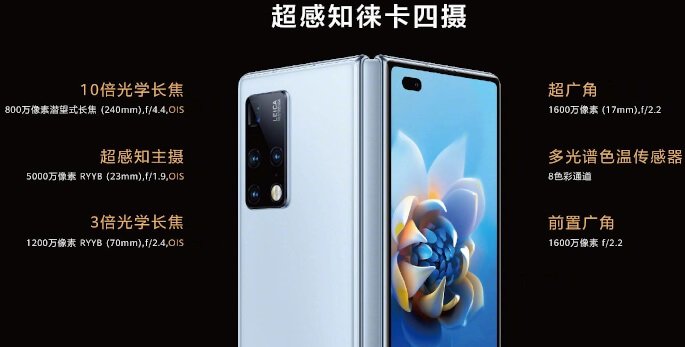 Talking about camera, there is an assembly of four lenses on the rear co-developed by Leica. Of these four, the main driver is a 50-megapixel lens with OIS, F/1.9 aperture and 1/1.28 sensor size. Additionally, there is an 8-megapixel periscope lens capable of 10X zoom and 20x hybrid zoom and 100x digital zoom. The other two sensors are for ultra wide (16-megapixel) and a 3x 12-megapixel optical zoom lens.

For selfie, there is a 16-megapixel snapper in the notch within the secondary display, and if you need even more crazy selfie shots, you can snapper with the main cameras. Note that there is no selfie lens within the larger display. While this means a distraction free display, it equally means you can’t make video call/chat except you switch to the smaller screen.

As for connectivity, the Mate X2 support dual SIMs, and a full fledged 5G network modem is supported as well. In unfolded form, the phablet measures a sleek 8.2mm. Sadly this body could not take more than a 4500mAh battery, but you can charge this battery faster, thanks to the bundled 55W charger. 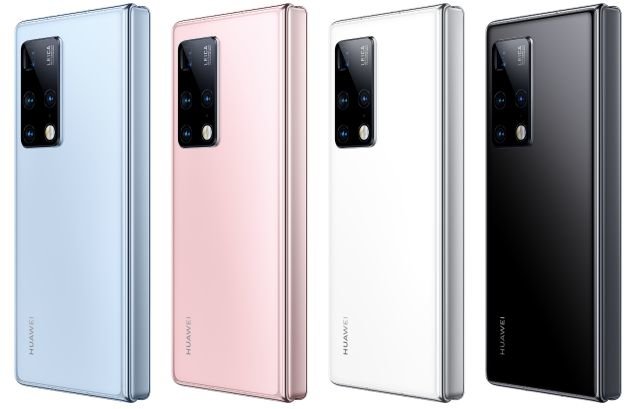 Other connectivity options includes Bluetooth V5.2, a 3.1 USB Type-C, 2.4/5GHz WiFi and many more. Although a 3.1 mm audio jack option is not included in these many mores, however you have the option to choose from four colors of Light Blue, Pink, White and Black.

Finally, for pricing, the 8GB RAM with 256GB ROM costs 17,999 yuan, while the same 8GB RAM pegged with 512GB RAM is priced at 18,999 yuan, an equivalent of $2,784 and $2,938 US Dollars respectively. The device will be available in China via online and offline store, but no word on availability outside of China, at least, for now.