Infinix Hot 10 is closing in; up to 7″ screen and Helio G70 expected

According to the source, the upcoming Hot 10 will spot a display with 720 x 1640 pixels resolution, which is similar to the tall 20.5:9 aspect ratio used in the Hot 9 Play and even the recently launched Infinix Smart 4 Plus.

But instead of the Helio A22 SoC used in the Hot 9 Play, or even the Helio A25 in the Smart 4 Plus, the upcoming Infinix Hot 10 will spot same Mediatek Helio G70 CPU used in the Note 7, paired with Mali-G52 2EEMC2 and 4GB RAM. 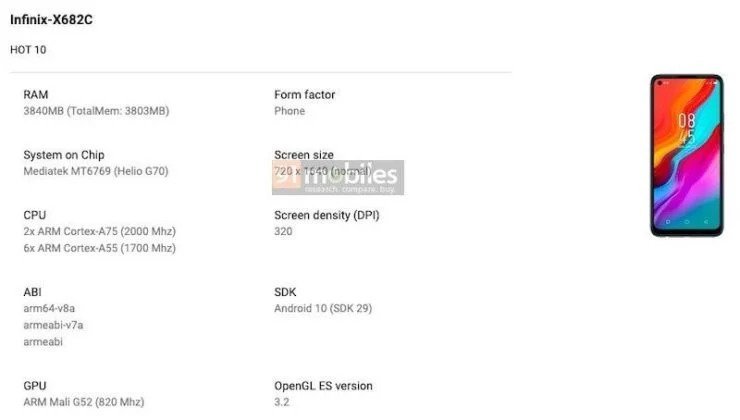 Some other content writers have the believe that the Infinix Hot 10 will be same as X682B and X682C. The former have already been registered on FCCID.io, and it spots same 4GB RAM and 64GB of internal storage.

A minimum of triple rear camera is expected on the device, and it will come with a rear placed fingerprint scanner as well. As for the display, 6.8-inches to 7-inches is expect. It will rock a punch hole notch with a 5100mAh battery out of the box.

Although it is great seeing that Infinix Hot-series is stepping up to Mediatek Helio G-series, but all the specs above are mere rumors and nothing official. Beside, the information is based on certification and development documents, and the official launch of the phone might still be miles away, and when it does, the value of Helio G70 might not be appreciated then as much as it is now.