Fans of the Infinix Hot-series can now rejoice as the company has just confirm official launch of the Hot 9. If the date since rumors regarding this device started flying was anything to go by, the Hot 9 would have been announced since November, or even October last year, at least that was when we were all expecting the device.

But now, Infinix has officially confirmed the launch date of the Hot 9. The device is set to debut in Indonesia on the 23rd of March, 2020; better late than never right? 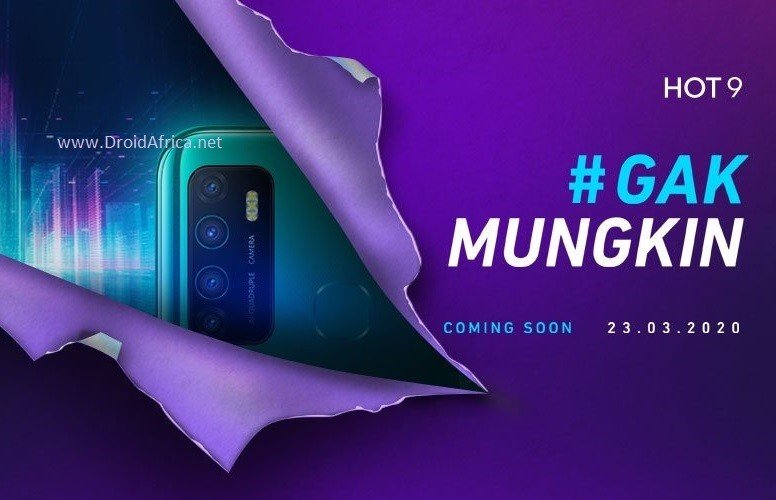 Not much is known about the Hot 9 so far. But from the launch postal in the image above, the Hot 9 will come with four AI camera modules at the back, with what looks like a triple LED flash, all arranged in a vertical form. The rear camera design looks far more premium that what we have the current Hot 8 and the Hot 8 Lite.

Base on what we were told earlier this year, the Infinix Hot 9 should mount above 6.5-inch display with 720 x 1600 pixels resolution. It is also believed that the device will have a pop-up selfie camera like the recently announced S5 Pro. The four camera modules at the back could be a combination of a 48 MP main sensor along with 3 other auxiliary lenses.

On the storage wing, a 64 GB ROM + 4GB RAM is envisaged. However, it is not clear either this device will run the Mediatek Helio P22 or the Helio P35, but we do know that the Hot 9 will have above 5000mAh battery, and will boot Android 10 out of the box.

Advertisements
Previous article
WHERE NEXT: Tecno Camon 15 headed to Pakistan
Next article
Samsung Galaxy A40 and the A80 now receiving Android 10