A new Tecno device, modelled KF6P have just gone through FCC certification. Looking at the rear view of the phones shared by FCC, shows that the phone will come under the Spark series, but it is not wholly clear which of the Spark model to expect. Is Tecno launching the Spark 8-series already? That is unlikely since the Spark 7-series are around 2-months old. 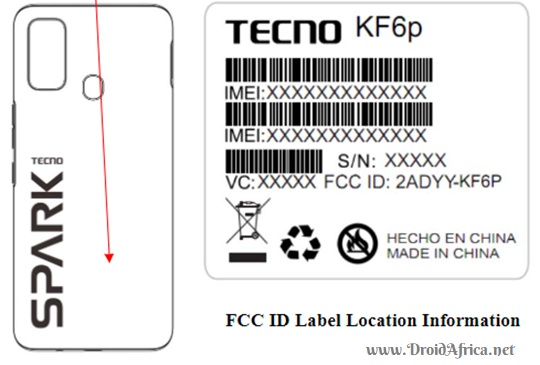 Recall that Tecno Introduced the Spark 6 Air exactly on the 30th of July last year, and that device has KE6. KE6j and KF6 as the model number for varying markets. Now our guess is pointing towards same direction. So this new upcoming Spark device might be the Spark 7 Air.

FCC documentation did not reveal much about these phone either. But pulling over to GeekBench database showed that a Tecno phone with KF6P as the model number has been previously tested on the platform, and as per the records, Tecno’s KF6P (aka Tecno Spark 7 Air, will rely on ARM MT6765G, which is also known as MediaTek Helio G35 octa-core CPU. 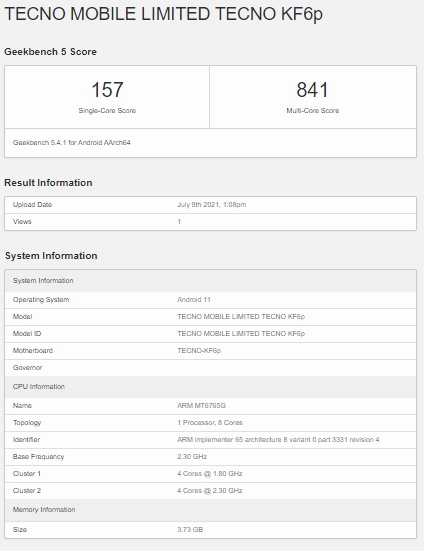 The database further revealed that the device will have 4GB of RAM, and will boot Google Android 11 out of the box. While we can’t guess any launch date for now, we strongly believe that if this is Spark 7 Air, then the launch is definitely by the corner, given that the predecessor; that is the Spark 6 Air was launched in 2020 within the close of July.

But still take this news with a pinch of salt though. In a related news, Tecno have officially confirmed the official arrival of POVA 2 in India on the 2nd of August. Perhaps, both phones might arrive same day.