Nokia just released two smartphones under the company’s G-series. The Nokia G11 and G21 are both successors to last year’s G10 and G20 respectively. The key difference between these two new comers lies majorly in their storage and camera specs.

Both the G11 and G21 has three camera lenses on their rears, but while the G11’s primary lens is a 13-megapixel, the G21 has 50-megapixel main shooter. The other two auxiliary lenses are a 2-megapixel depth and a 2-megapixel macro sensor on both side, while an 8-megapixel selfie lens is kept in the front of both.

As for their storage department, the G11 is only available in 3GB RAM with 32GB ROM, while the G21 comes in either 3GB + 64GB, 4GB + 64GB or 4GB + 128GB. Thankfully, all storage options are expandable via a dedicated external SD-card.

Nokia has made two significant changes on these new G-series in comparison to their predecessors. First, the design; although the screen on both model remains a 6.5-inches with a dewdrop notch on both model, the rear camera design has shifted from the centralized circular module on the older units, to a sided vertical lens arrangement. Secondly, both the G11 and G21 now relies on UNISOC CPU, instead of the MediaTek Chipset on their predecessors.

Talking about Chipset, you are getting 8-core UNISOC Tiger T606 12nm CPU. The SoC has two Cortex-A75 @1.6GHz, and six Cortex-A75 CPU @1.2GHz, along with Mali-G57 MP1 GPU. This is same Chipset powering Motorola’s Moto E20, and Tecno’s Spark 8C smartphones, and even more to come.

Both phones are powered by same 5050mAh battery that support 18W fast charging via USB Type-C, but Nokia has included only a 10W charger in the box. The phone boot Android 11 out of the box with a promised Android 12 OTA update, and both has a side-mounted fingerprint scanners, and with option to chose from either single or Dual Nano SIMs on both sides.

Both the G11 and the Nokia G21 comes in 164.6 x 75.9 x 8.5 mm. In fact, both phones look so much alike physically that it takes only their painting to identify which is which: Charcoal and Ice (Blue) are the color options available to the G11, while the G21 comes in Nordic Blue and Dusk color. The G21 will start selling from today; the 15th of February at 199 Euros, while the Nokia G11 will be delayed till march with an expected price tag of 159 Euros. The Nokia brand under the Finland's HMD Global in the United States, has announced a new Nokia G100 android smartphone... The smartphone's brand, Nokia, under the Finland's HMD Global has announced a 5G network communication compatible smartphone in the United... 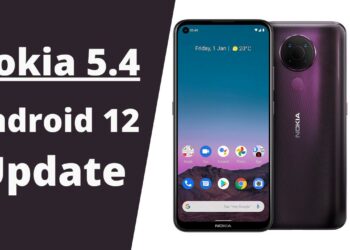 Are you a proud owner of Nokia 5.4 smartphone? Well, rejoice as HMD Global has just began the official roll-out... Looking past mere teasers or rumors? Nokia have just announced the G11 Plus smartphone, rocking UNISOC Tiger T606 CPU, the... Entry-level Nokia C200 is now selling in the US via Tracfone. The device is powered by a quad-core CPU, and...