Unknown Nokia smartphone with product number TA-1234 is now ready to go official. The device has just marked her register at Wi-Fi.org. The most interesting part of it is, the Nokia TA-1234 might be the first device from HMD Global to officially launch with the Snapdragon 665 and the latest Google Android 10.0 out of the box.

HMD Global has been putting efforts, pushing Android 10 to most of her phones, especially the once currently trending in the market. But the company is yet to launch a device running Android 10 out of the box, and if the certification screenshot below is any thing to go by, then the Nokia TA-1234 might be breaking that siege. 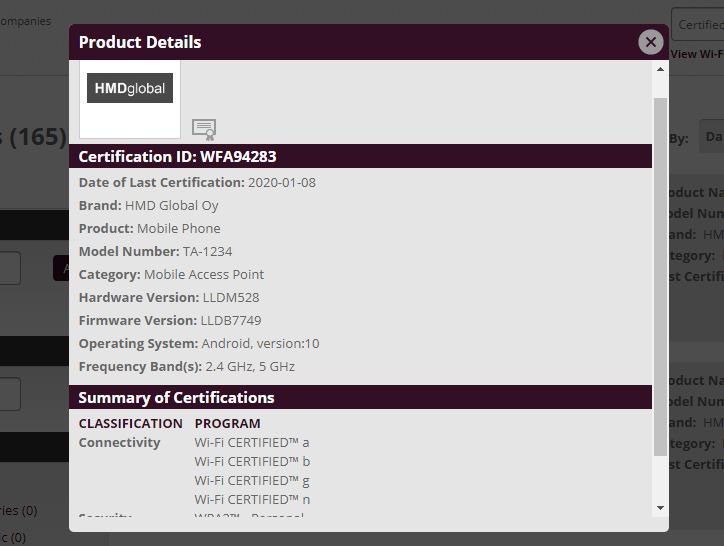 According to what we know, Nokia TA-1234 will use the Snapdragon 665 chip. The name or other configuration information is unknown but with Android 10, the Snapdragon 665 chip seems to be an interesting mid-range smartphone that many Nokia fans are waiting for. Mobile World Congress MWC 2020 is about to take place from the end of February, Nokia TA-1234 and Nokia 8.2 5G could be two bright candidates to participate in the upcoming event.

About Nokia 8.2 5G, this smartphone is believed to have a 32MP selfie camera, while the back is a 64MP main camera. Nokia 8.2 will use 7nm Snapdragon 735 chip, built-in 5G modem, next-generation AI Engine, gaming support and many other advanced features. The selling price of Nokia 8.2 5G is expected at $500 (about 11.6 million).

Stephen Ekpahttps://www.droidafrica.net
Stephen is the Editor-in-Chief @DroidAfrica. His work on DroidAfrica is born out of pure passion for tech, especially as it relates to smartphones. When Steve is not writing tech, then he is reading tech.
Share
Facebook
Twitter
Pinterest
WhatsApp
Previous article
5 Huawei smartphones caught cheating, now excluded from Geekbench
Next article
Android 10 based on EMUI 10.0 for Huawei P30 Lite now sending