The Samsung Galaxy A50 is one of the most successful mid-range device launched by Samsung in 2019. The device is known to offer great value for money and as one of the most preferred device among buyers who are not willing to spend too much on smartphones.

In a research conducted by Counterpoint, the A50 was tag the third best-selling phone in the world for the third quarter of 2019. But the Galaxy 50 run on Android 9.0 at launch, and has stay that way since February, 2019. But if the image below is anything to go by, then the A50 might be getting it own share of Google Android 10.0 soon. 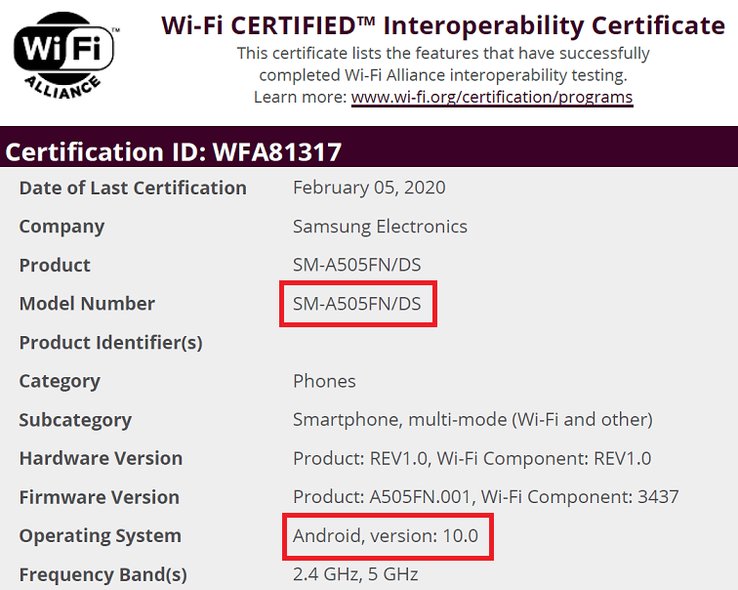 The image above came from Wi-Fi Alliance certificate of the Galaxy A50 running Android 10, which should be based on One UI v2.0. The model number in the image is SM-A505FN/DS, which is the international variant of the A50, an indication that the Samsung Galaxy A50 could be getting Android 10 sooner than fans expectations.

Although the A50 has gotten a successor, which is the Galaxy A51, but the device still remains a great value for money among mid-rangers. It came in a 6.4-inch (2340 x 1080 pixels) Full HD+ Infinity-U Super AMOLED display. It is powered by an octa-Core Exynos 9610 10nm processor with Mali-G72 GPU. It has a triple rear camera setup of 25MP primary sensor with LED flash, f/1.7 aperture and 5MP depth sensor with f/2.2 aperture and 8MP ultra-wide-angle camera with f/2.2 aperture.