As mentioned in the Unboxing review, the design of the Camon CM is to some extent unique, but nothing out of the ordinary. The Camon CM combines the look and feels of Tecno Phantom 8 from the front, and the older Camon CX from the back. You should already know that one of the major SP of the devices is the Full Vision display, which Tecno code-named CMore. But that does not mean the phone is bezelless. There is still above 10-mm bezels above and below the screen, and about 2.4mm to the left and right hand side of the phone.

Above the 5.65-inch HD+ screen, there is a notification LED, the 13-megapixel front facing camera, a speaker grill, ambient light sensor and a single front facing LED flash, all arranged from left to right, while the traditional Android 3-key navigation keys are replaced with an on-screen soft keys. The base of the devices host a microphone, a USB 2.0 port and the loud speaker dots. There is a power button and a volume rocker to the right, a 3.5mm audio jack overhead and the 3-in-1 card slots to the left hand side of the device, which can carry 2 nano-SIM and a 128GB SDcard at same time.

At the back, there is a protruded 13-megapixel main camera, alongside a powerful and beautifully designed ring flash hosting 4-LED flash. The rear fingerprint sensor, Tecno logo and the Camon branding occupies the rest of the back panel, with network reception straps travelling through the top and bottom of the rear panel. To be sincere, I’m completely satisfied with the built quality of the Tecno Camon CM. The device is currently the lightest 5.7-inch smartphone I’ve seen, weighing just 134 grams. The measurable tiniest edge of the devices is kept just at 6.6mm, while the overall thickness of the CM is 7.8mm. This is a big improvement in design considering the fact that the phone is got a 3000mAh battery. The measurements are far lesser than what I saw on the Ulefone Mix 2 with almost 9.8mm and a whooping 195 grams, yet with almost similar specs and screen size.

In all, I am very satisfied with the design and built quality of the Tecno Camon CM/Camon CI. I even tried twisting the device to see if I could notice some breaks and cracks, but the devices still remained sturd. My only issue with the design is the protruding rear camera lens which would start taking scratches with long usage, and then, there’s an included TPU silicon case. 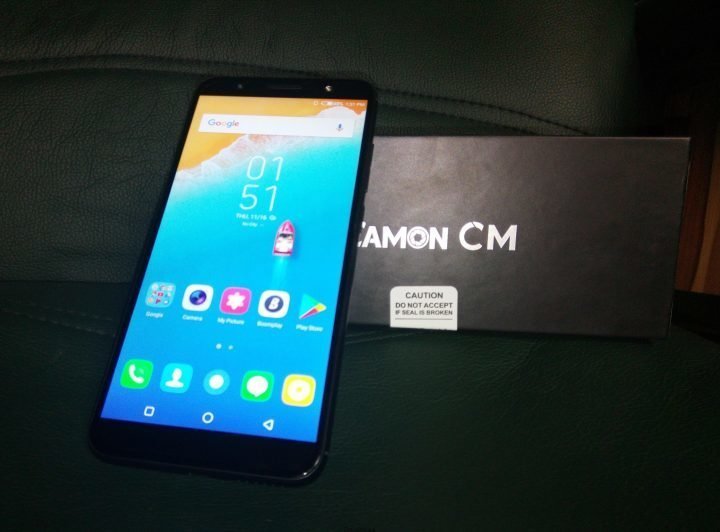