Just as promised, UMiDIGI have just announced their latest flagship mobile phone dubbed the UMiDIGI S5 Pro. The device is the direct successor the UMi S3 Pro, launched back in December of 2018. The new S5 Pro comes  with series of upgrades over the predecessor. For instance, instead of Helio P70, you are getting Mediatek Helio G90T CPU, instead of overhead notch, there is now pop-up selfie, and even a double sized storage capacity over the S3 Pro. 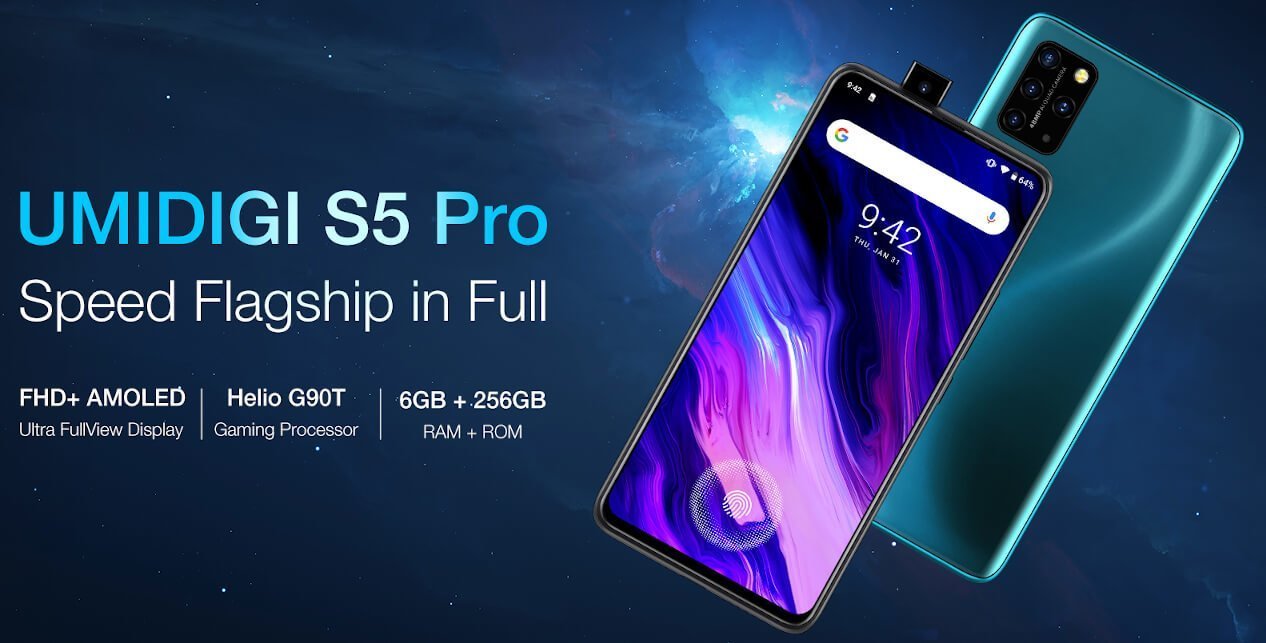 For optics, the UMiDIGI S5 Pro has four camera sensors on the backside with the main sensor being a 48-megapixel lens with F/1.8 aperture. The remaining three lens includes a large 16-megapixel super-wide angle lens, a 5-megapixel depth sensor and a fourth dedicated 5-megapixel macro lens. For selfie, there is a loner 16-megapixel lens kept in the motorized pop-up upfront.

Powering the S5 Pro is an octer Mediatek Helio G90 CPU clocked at 2.0GHz, along with 800MHz Mali-G76 GPU. Two popular phones that run this CPU includes the Xiaomi Redmi Note 8 Pro and the more newer Realme 6, all of which are gaming centered mobile phones.

Higher end graphical intensive games usually requires bigger storage. UMi is aware of this fact, and as a result, have bundled the S5 Pro with 6GB LPDDR4x RAM and a larger 256GB UFS 2.1 internal storage, and if that is not enough, you can still attach addition 256GB external storage. Noticed the absence of a rear placed fingerprint scanner? Well, that is because UMiDIGI made use of an in-screen fingerprint scanner.

The UMiDIGI S5 Pro comes with a Hybrid Nano-SIM slot, with support for global 3G/4G LTE network. It is available in Ocean Blue and Cosmic Black colors. The device is priced at $333 dollars, and currently available on pre-order via Aliexpress. Fueling the phone is a 4680mAh battery with 18W fast charging via a USB Type-C interface, while Android 10.0 run on the phone out of the box.

Stephen Ekpahttps://www.droidafrica.net
Stephen is the Editor-in-Chief @DroidAfrica. His work on DroidAfrica is born out of pure passion for tech, especially as it relates to smartphones. When Steve is not writing tech, then he is reading tech.
Share
Facebook
Twitter
Pinterest
WhatsApp
Previous article
Nokia 3.2 Android 10 update now sending
Next article
Samsung Galaxy A21 has 4000mAh battery and four rear cameras