After almost endless teasers and rumors, Xiaomi and it partner Shark company, has today, unveiled the Black Shark gaming smartphone as promised. The smartphone is the company’s first gaming device, dedicated to folks who loves playing heavy graphical games on their handheld devices. The Xiaomi Black Shark smartphone packed Qualcomm Snapdragon 845 SoC and 8GB of RAM. Despite being design primarily for gamers, you still get a capable dual rear cameras, and a larger 4000mAh battery. From the front, the handset looks like a regular smartphone, but the rear is designed with the ability to support a Shark GamePad controller, which turns the smartphone completely to a gaming console.

The left side of the phone has a dedicated Shark Key that allow users to access impressive gaming zone whereas the volume buttons and power key are on the right edge. The backside of the phone features the dual camera setup and the easily noticeable green colored “S” logo at the center.

The Black Shark phone features a 5.99-inch InCell display. This display a Full-HD+ with 2160 x 1080 pixel resolution and carries support for DCI-P3 color gamut. There is also the presence of an MEMC intelligent motion compensation technology, which ensures smoother video quality while playing games on it. As mention above, the Black Shark gaming phone is equipped with Qualcomm Snapdragon 845 CPU along with either 6GB or 8GB RAM. At the launch event, Black Shark CEO Wu Shimin revealed that the device had scored 279,464 on AnTuTu. To control the internal temperature, the handset features a multi-layer cooling system that includes high thermal conductivity copper alloy substrate, nano-composite graphite, heat pipe and liquid cooling that can bring down the temperature of the device by 8 degrees by improving the CPU cooling efficiency by 20 times. (Thinking about the Tecno Camon X/X Pro right now lol) Selfie lovers are not left out either, as the device houses a large 20-megapixel camera upfront. The sensor have support for an f/2.2 aperture, 5P lens, intelligent beauty and 4K video shooting at 30fps.

The handset is loaded with a gaming focused JOY UI, a customized Android Oreo ROM that includes some core features of the MIUI. While gaming, the fingerprint sensor canbe swiped to Shark Dock that includes handy features like silent mode, DND and more. gaming Shark GamePad to the top portion of the phone (as shown below in the image). It is packed with a joystick, a trigger and a 340mAh battery that offers 30 hours of power. The gamepad can be used with other Android devices too that support Bluetooth 4.0 and Android 4.4 or above.

The Xiaomi Black shark gaming smartphone is available in Polar Black and Sky Gray, and will be available starting April 20, 2018.

And if you want to enjoy full gaming experience on your device, then consider adding the Shark GamePad with an extra budget of 179 Yuan (~$29). 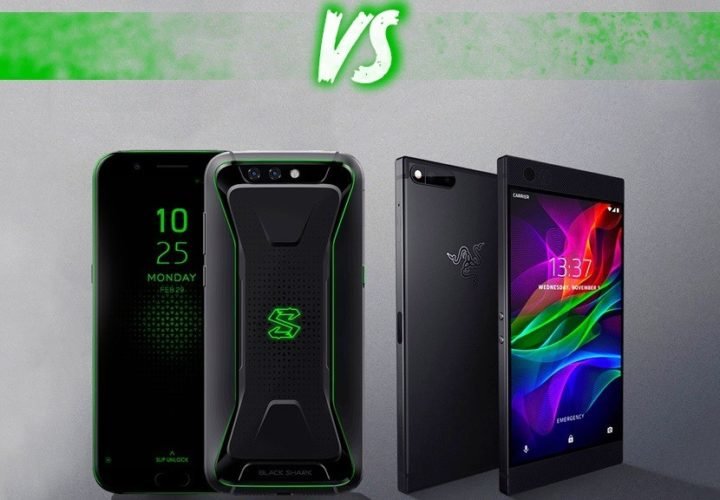