Tecno Pop 5P is the higher version of the vanilla POP 5. The model has bigger display and bigger battery. The screen is a 6.52-inches with 720 x 1600 pixels resolutions. It has a dewdrop notch overhead housing the selfie camera.

On the inside, the phone is powered by a 1.3GHz Quad-core Spreadtrum SC7731E(?), 2GB RAM and 32GB of internal storage, expandable up to 64 GB via microSD card.

The device comes with a single 5 MP main camera at the back, while an 8-megapixel lens is used on the front with LED lights on both side.

Additionally, there is a fingerprint scanner on the rear, and it also support FaceID too, but you are getting 2G/3G only network. The model is powered by a 5000mAh battery and runs Google Android 10 (Go Edition) out of the box. The full specifications and silent features of Tecno Pop 5P are detailed in the specs table below. 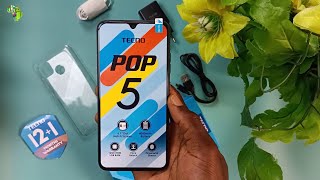