Honor 30i, Huawei Y8p look-a-like is headed to Russia

It seems Honor is currently working on a new smartphone for the Russian market dubbed Honor 30i. A promo video showing some of the features of these device have showed up online, and along with specs shared together with the video, the upcoming 30i might simply be a rebadged Huawei Y8P.

The device will sport a 6.3-inches AMOLED screen with 1080 x 2400 pixels resolution. It will have a U-shaped notch like the Y8P, and come with a biometric scanner hidden under the display. The device will be based on Huawei’s Hisilicon Kirin 710F with 4-core Cortex-A73 CPUs and 4-core Cortex-A53 with Mali-G51 GPU.

Only 4GB RAM is stated, but storage is kept fairly large at 128GB, which is further expandable up to 512GB via SD card. The device will run EMUI v10.1 based on Android 10, and will have HMS instead of GMS.

On the camera department, triple sensors are expected at the back, with the main snapper being a 48-megapixel module, while a single 16-megapixel selfie snapper will seat upfront. One interesting difference between the Y8P and the Honor 30i is the presence of a 20W fast charging on the later, which was absent on the former, but power is still supplied by same 4000mAh battery. 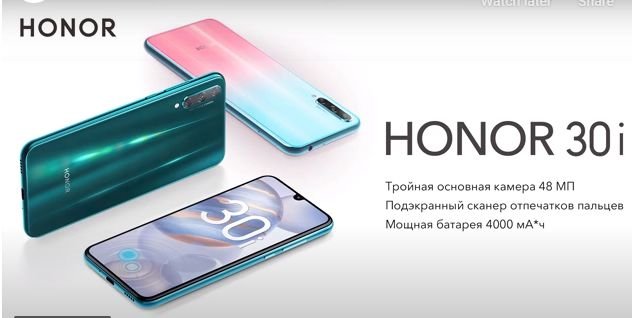 Finally, the device is expected to come in Midnight black, Phantom blue, and Icelandic frost colors, rumored to be priced at RUB. 20,990, which translate to about $278 USD. The price tag have long been taken off the source site, which means the above price might not be the final price of the device.