Every smartphone OEM have their areas of target when making phones. Although while some OEMs literally have a smartphone specific to every market segment, other OEMs like iTel Mobile focus primarily in a particular segment, and that is the entry-level/basic phone market. Let quickly look at the unboxing and review of the iTel P37, which was launched few weeks ago.

The review covers the vanilla iTel P37 with 6.5-inches screen, and not the Pro 4G model that has 6.8-inches display. Here are the key specs of the P37 standard model. 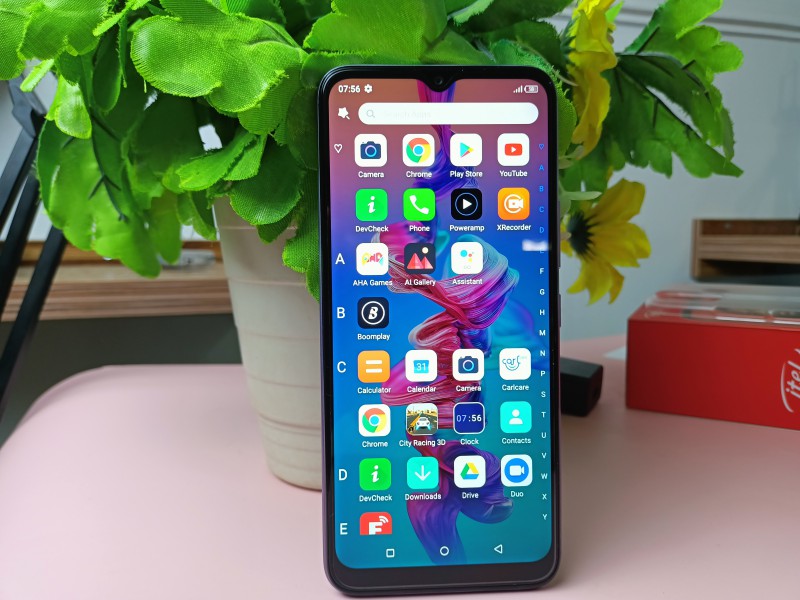 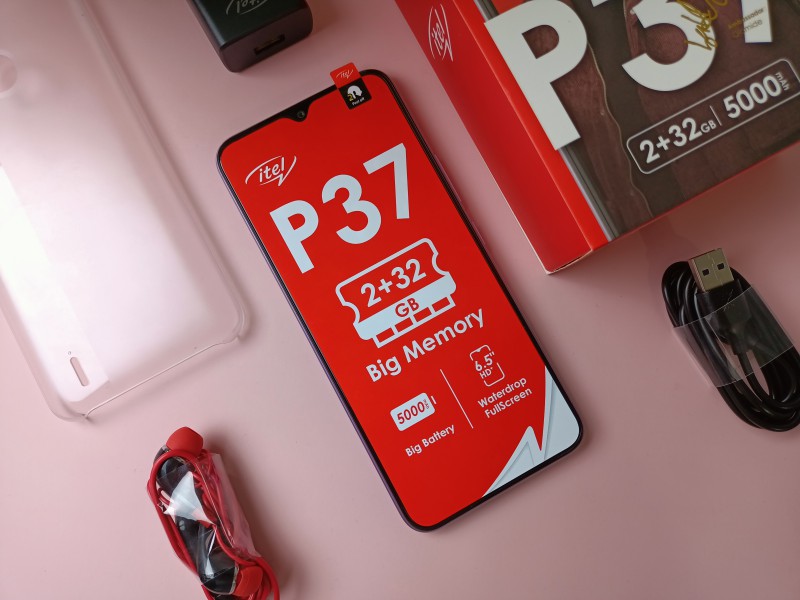 The P37 came in the usual red iTel box, carrying Olamide and the device’s key specifications. On opening the box, you are getting; 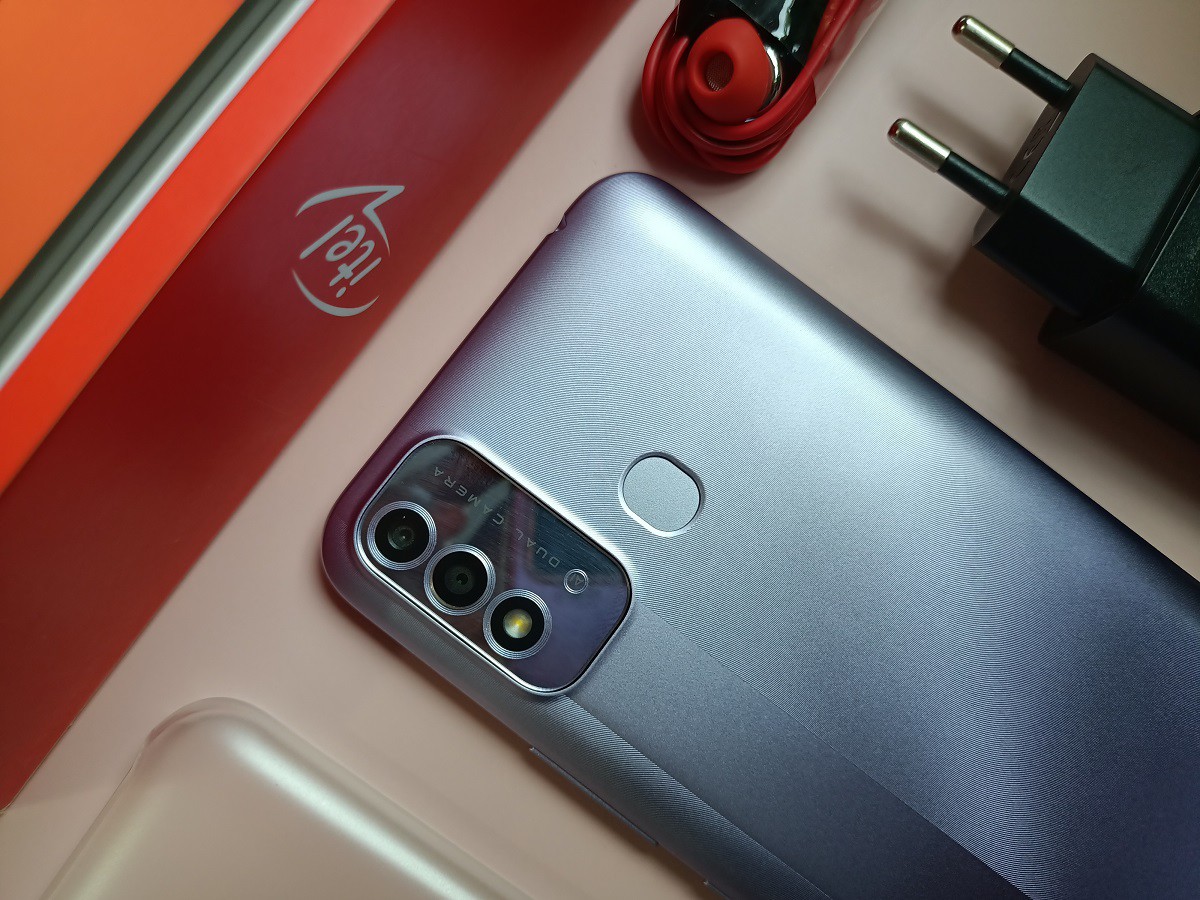 So the P37 is the direct successor to the P36 of last year, and come in same plastic finishing with a frontal screen that looks similar to the last model. The device sports a 6.5-inches screen that has a notch cut-out overhead.

There is the volume rockers and power button on the right hand side.

There is the 3.5 millimeter Audio jack on the head.

The left hand side is bare, no SIM card trail or any form of button on here.

There is a single microphone and the micro USB 2.0 on bottom.

The rear dual cameras are kept in a module that has a mirror-like cover. Within this module, there is a dual AI camera lenses and a single LED flash. The color here is Gradient Purple, but there’s also a Gradient Blue and a Dark Blue color as well, and a rear fingerprint scanner is present too. 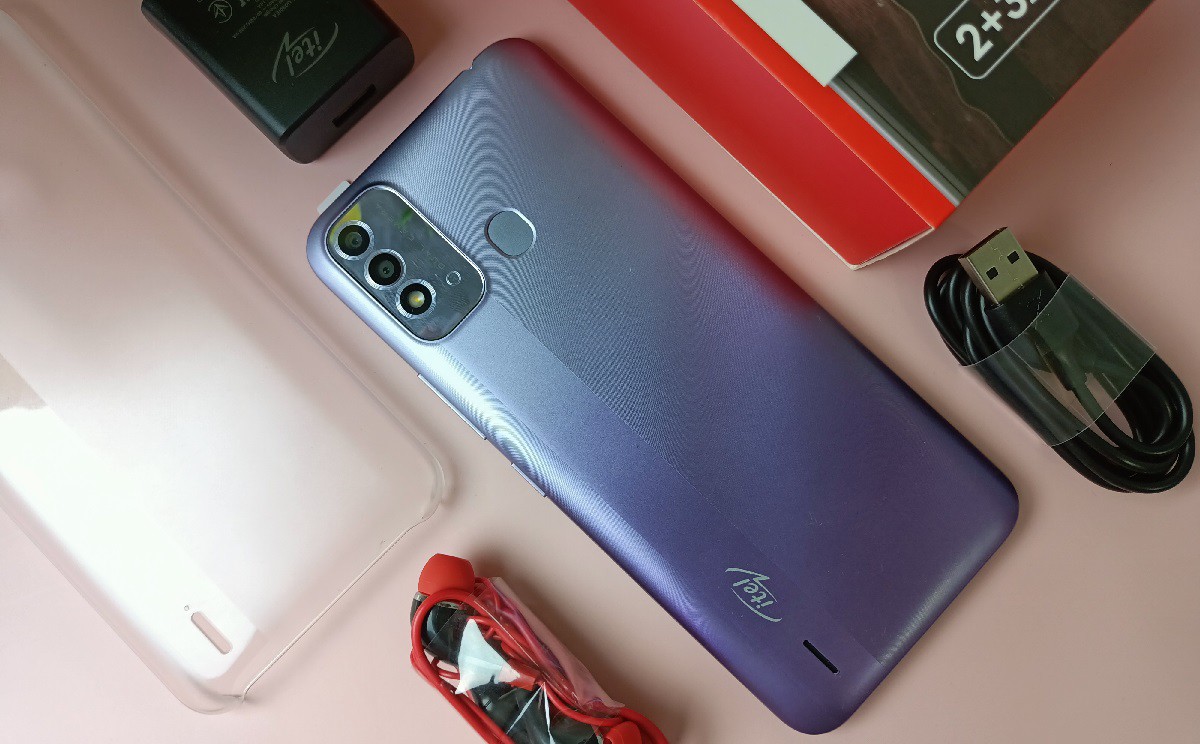 The rest of the back is occupied by iTel’s branding, and the rear speaker opening.

Since no card trails is available, to insert your SIM, you’ll need to lift the rear cover, which will reveal two independent Nano-SIM slots, a space for an SD card and the large 5000mAh non-removable battery. 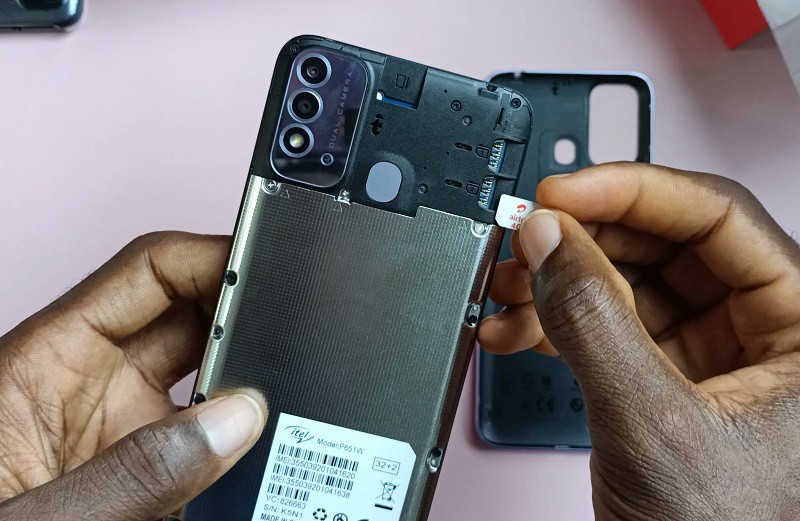 As mentioned above, the P37 comes in a plastic body, which is exactly what you should expect from a phone under 40k. As for the built quality, I was surprise to see how solid the device feels in the hands, despite having a removable back panel.

Given the battery capacity, you should surely be ready to endure some extra weight. Not that the phone is anywhere near a brick, but 196 grams can not be deemed light. 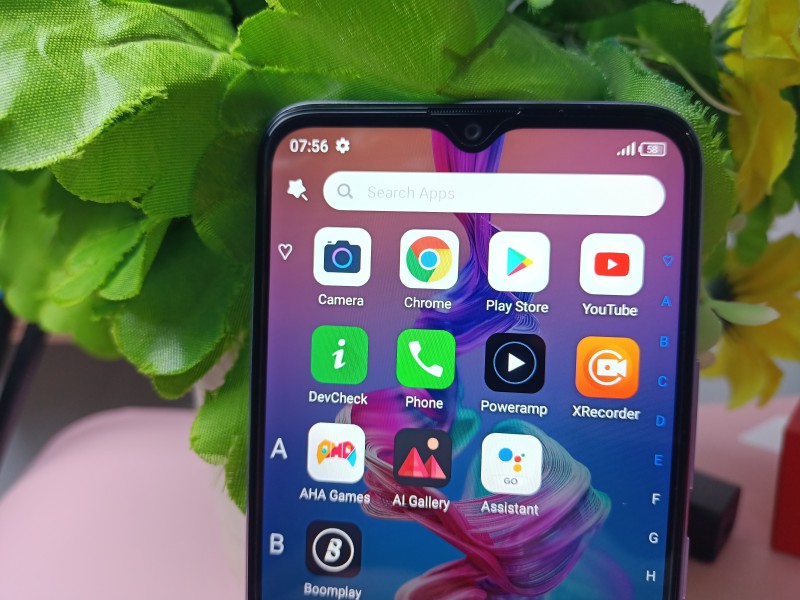 Interestingly, you are getting rock-solid feedback from the volume rockers, far better even than the more expensive Hot 10 Lite which we review few months back.

I also love the way the rear fingerprint scanner feels seemly blended into the rear panel of the phone. In addition to the physical fingerprint scanner, the P37 also have FaceID. I notice some hesitations and delays when unlocking via these two means, but in the end, bot lockers still get the job done. 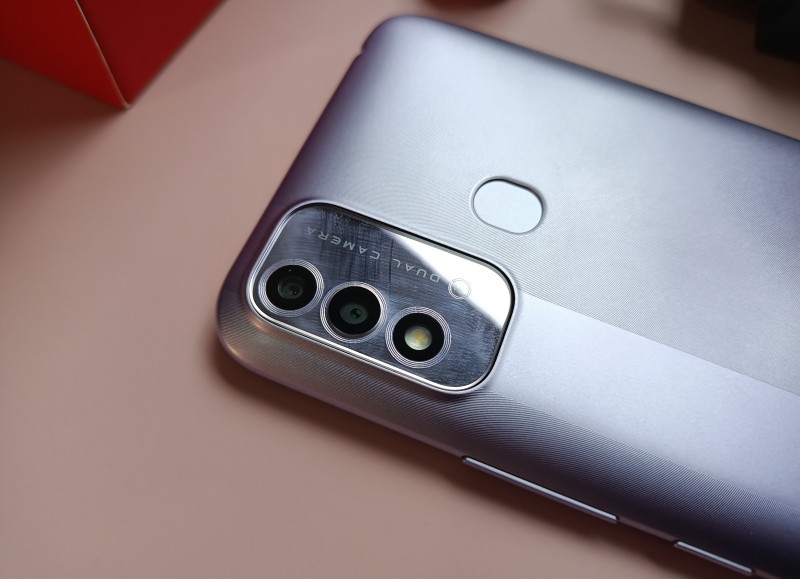 The built quality is on target given the price. I just wish iTel opted for a card trail instead, and that this rear loud speaker is kept in the basement to prevent it from being muffled on surfaces like chair on bed tops.

Let face the truth, I have my issues with the iTel P37, but if there are any aspect of the device that I like the most, the display tops the chat. This is definitely not the best smartphone display out there, not even close to half, but at this price tag, it definitely among the good ones. 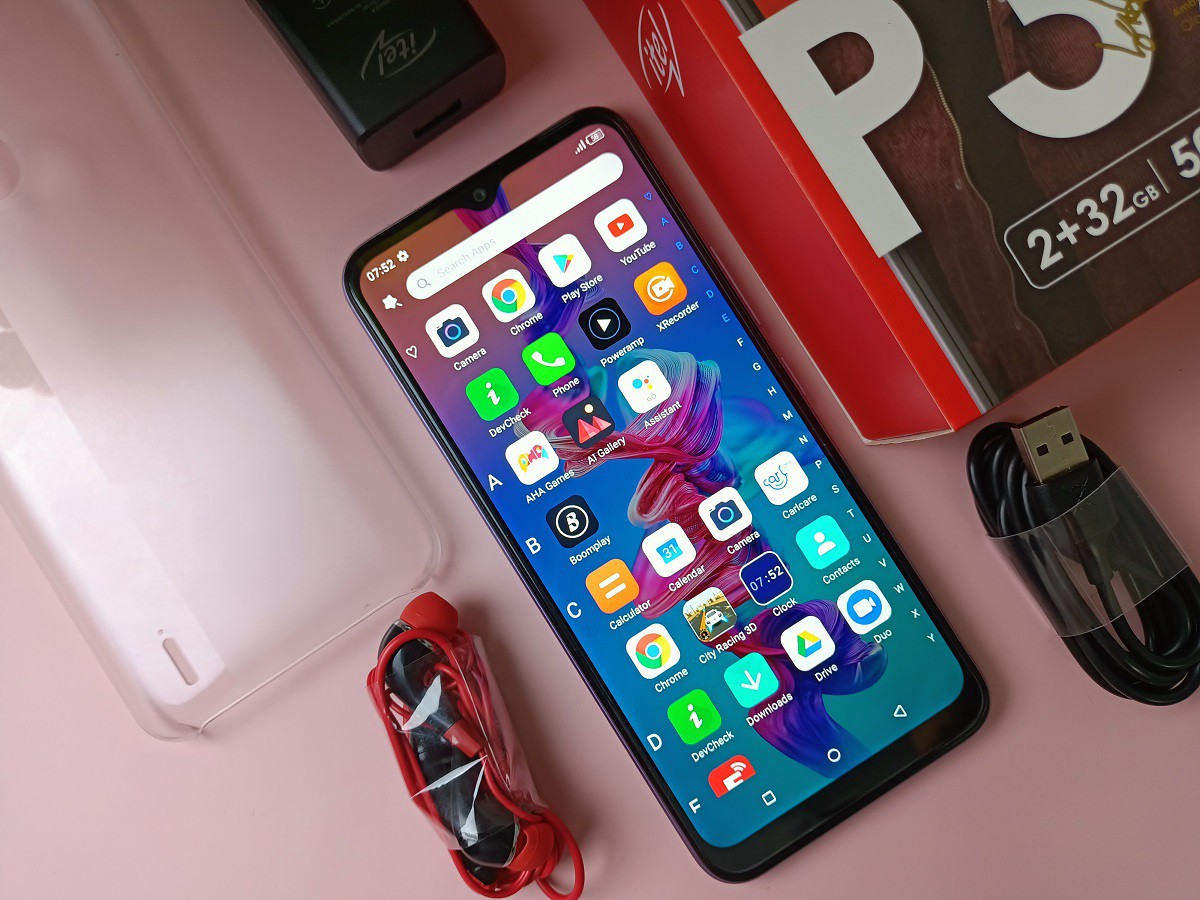 On paper, the P37 has a 6.5-inches screen with 720 x 1600 pixels, that houses a notch overhead. Thankfully, the display looks sharp with punchy colors.

The display resolution is same on the Tecno Spark 7P with 6.8-inches screen. But since the P37 has a smaller screen, it is able to gather more pixels per inch, making text and icons sharper than the Spark 7P. See our Tecno Spark 7P full review HERE. 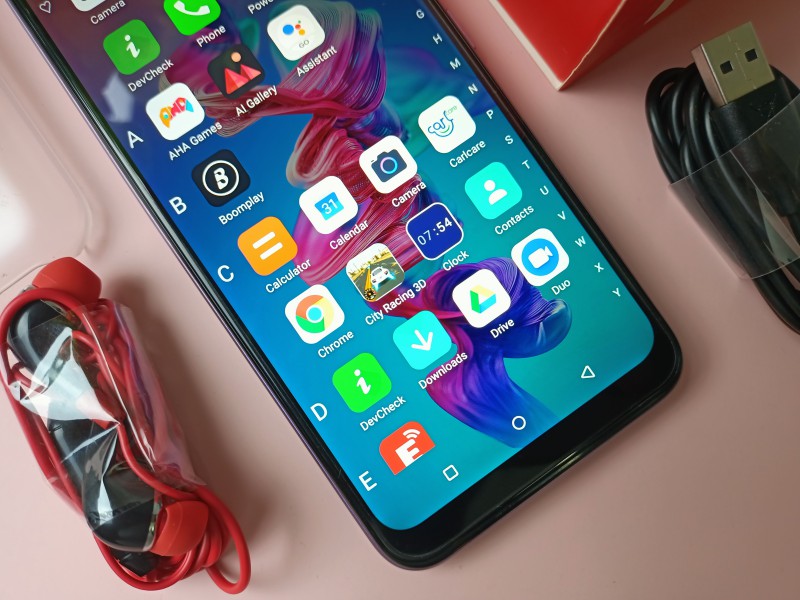 Although you may need to tilt the screen at some angles when using the device under direct sunlight due to weaker brightness nit. Phones with AMOLED screen or OLED screens are better suited for extreme outdoor usage, but some of such phones cost about 3-7 times the price of P37.

Camera is less impressive than I expected!

Ok, so the camera on the P37 does produce social media ready images with vibrant colors, but the image quality is not on per with the price. As per my expectations, it looks like the P37 is using an interpolated 5-megapixel lens to 8-megapixel. How did know this? 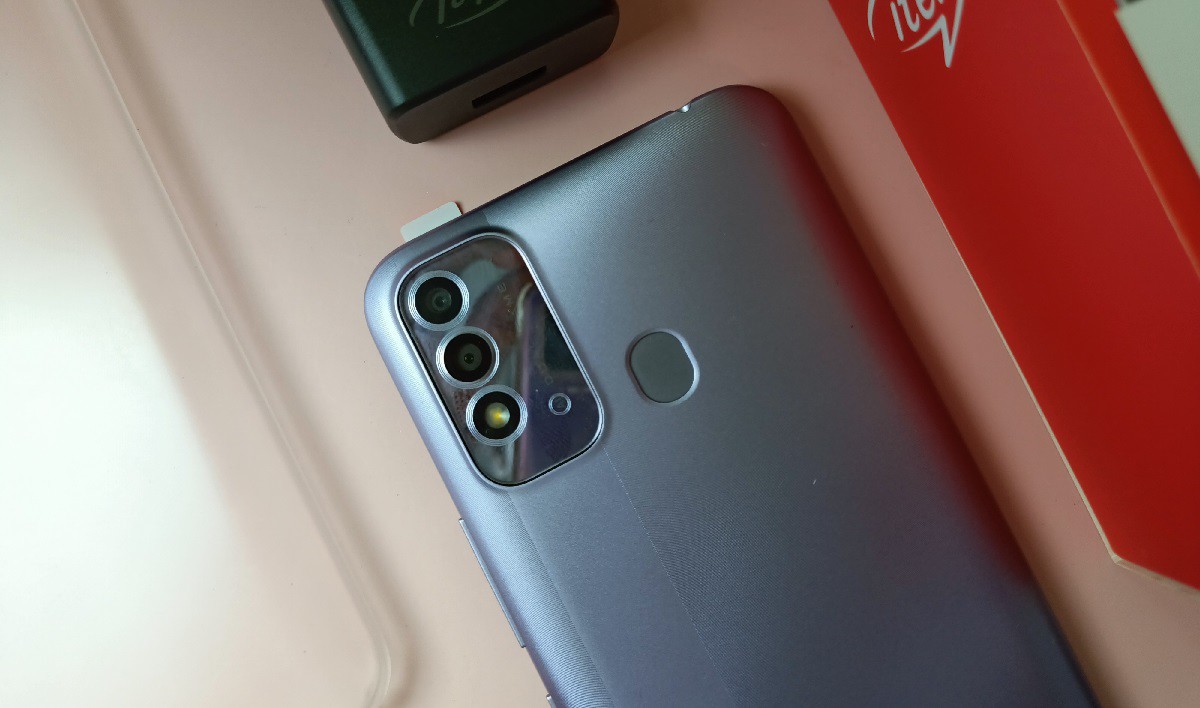 When I compare the camera output from the P37 with that of Tecno POP 5, the POP 5 has better output than the P37, even though Tecno confirms 5-megapixel lens on the POP 5, instead of the claimed 8-megapixel on the P37.

When taking outdoor photos, you need to be sure your object is properly positioned in front of your key light. This is because the device has a very weak dynamic range and any other light interference is noticeable on the overall image quality.

Admittedly, the P37 has a very strong LED light on the rear, but even at that, images capture with the LED lights are miserable due to its poor dynamic range.

The P37 also claims a 5-megapixel selfie lens on the front. There is not a dedicated LED light given to this lens, rather the display produces a bright soft light when snapper in lowlight situation.

The Chipset on the P37 is SC7731e, same CPU on Tecno pop 5, and actually, it is my major turn off with the device. The CPU is both old and weak, and most importantly it does not support 4G LTE network, but only offer 2G/3G only network.

I’m sure the P37 is not created primarily as a stand alone device, except for folks that are just beginning their smartphone journey. But if you’re getting the device as a standby/backup smartphone, which is what it is, you may have little or no issues with this CPU.

On the other hand, if 4G LTE network is of any importance to you, you might just want to look somewhere else, or probably go for the P37 Pro model which support 4G network, and has even better CPU.

OS: Rebadged HiOS or XOS; What should I say?

The OS simply goes by the name iTel UI, and it is based on Android 10 (Go Edition). Since iTel have same origin as Infinix and Tecno, the UI layout and experience is not much of a difference from the other brands.

It is totally difficult to tell if the OS is a rebadged HiOS or XOS, but the interesting though is the UI on the P37 looks a lot more polish and bloatware-free than what you would find on the other two counterparts.

The pre-loaded apps are also kept minimal, so you’d only need uninstall few apps, that’s for those who prefers stock-like Android UI. To opt-in for even more stock look, you can try third party launcher on the Play Store.

Battery: Power; that is what the ‘P’ means!

As stated above, I consider the P37 as a back up or standby device, and one key feature a good backup phone should have is battery strength. iTel is aware of this, and preloaded a large 5000mAh non-removable battery on the inside of the P37.

The unit, coupled with the power efficient CPU equals longer and better battery strength. The device has been with me for exactly 9-days now, and I’ve only charged it once so far, just to give you an idea of how well the battery lasts. But only 5V/1A charger is includes, and this slows down the charging pace.

The P37 is a good back up device, and to be sincere, I like every thing this device offers from display to built quality and battery, if not for the aged CPU, that lacks 4G LTE network, but there are alternatives though.

Talking about alternatives, the pro model seems to be more fairly priced than this standard model, and that should be what you should go for. It has octa-core CPU, the display is larger at 6.8-inches, and most important, it support 4G LTE network.

But if you wish to look outside of iTel, the Nokia 1.3, Vivo Y1s, or Infinix’s Smart 5 4G model are some worthy competitors that you may check out. You can also take a look at our list of best smartphones to buy under N40,000 Naira in Nigeria for more. iTel is getting better; launches Vision5 Plus with Tiger T606 Chipset

itel Vision 5 now selling in the Bangladesh; it a rebranded S18