A purported Samsung Galaxy A02, successor to the Galaxy A01, has been caught playing around on GeekBench. The upcoming entry-level Sammy device with the model number SM-A025F, scored 757 in single-core and 3,904 in multi-core tests respectively, on the popular cross-platform processor benchmarking site. 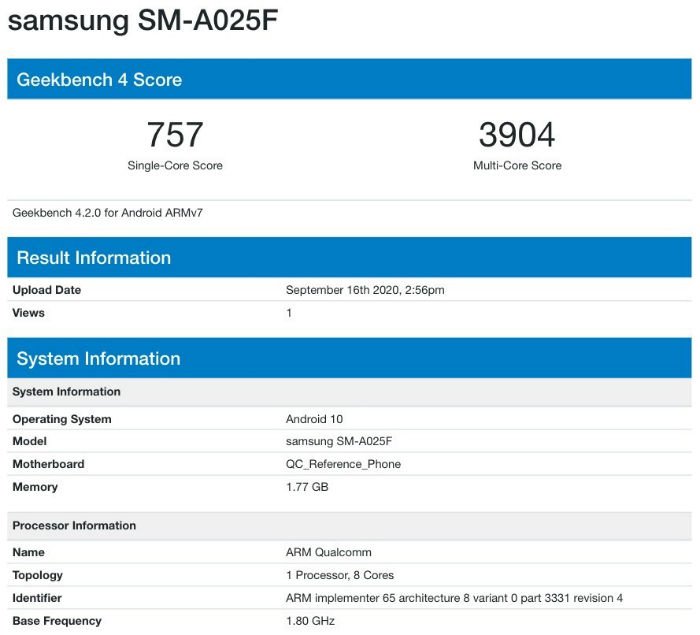 Few other details revealed as per the image above includes the presence of Google Android 10, 2GB RAM and an octa-core CPU with a base speed of 1.8GHz. This CPU according to rumors, is the 3-year old Qualcomm Snapdragon 450 SoC, released back in June of 2017. Well, we would wish to see a more recent CPU, but this Chip should still be tougher than the SD439 used on the older Galaxy A01.

You might want to recall that the Samsung Galaxy A01 was announced back in December of 2019, sporting a 5.7-inch HD+ Infinity-V display and powered by an octa-core Snapdragon 439 CPU, paired with 2GB RAM and 16GB internal storage. The device had dual camera modules at the back and run on Google Android 9.0 with Samsung One UI custom skin out of the box, offering a 3000mAh battery in it 8.3mm body.

That battery capacity was not the best we’ve seen in a Samsung phone lately, and the company have long upgraded battery wise, since the launch of A01. We might not have a 7000mAh battery in the upcoming A02 as seen on the M51, but it should be better and larger than the 3000mAh juice used in the A01. In either case, these are mere personally suggested and the final product might offer different specs, so take in with a pinch of salt.

Advertisements
Previous article
Infinix Note 7 with Helio G70 CPU finally arrives in India
Next article
Top 6 features of iOS14, iPadOS14 and the devices getting them