Tecno Spark 8 now selling in Nigeria ahead of official announcement

Tecno’s Spark 8, the actual successor to the Spark 7 is now selling in Nigeria even though it is not officially announced yet. The device which is selling mostly via offline shops, come in a 6.5-inches screen with 720 x 1600 pixels. The model is almost like a rebadged vanilla Spark 7, but with a redesigned rear and a reduced 5000mAh battery.

It is powered by MediaTek’s Helio P22 CPU, has 2GB RAM, 64GB expandable ROM, and offers Google Android 11 with HiOS 7.6 out of the box. Base on what we’ve seen so far, the major differences between the Spark 7 and the Spark 8 is the rear design and the battery power.

Although camera specs on both phones remains same, but the Spark 8 has a much more larger camera panel, which now houses the Spark branding and the rear fingerprint scanner as well. The back design also features a more shinier finishing than the Spark 7.

As for the battery, now a 5000mAh battery with a 10W micro USB 2.0 charger is used, instead of the 6000mAh battery power on the predecessor. Even though the device is not officially announced yet, we were not really surprised seeing it online, since it has been previously certified on authority sites. 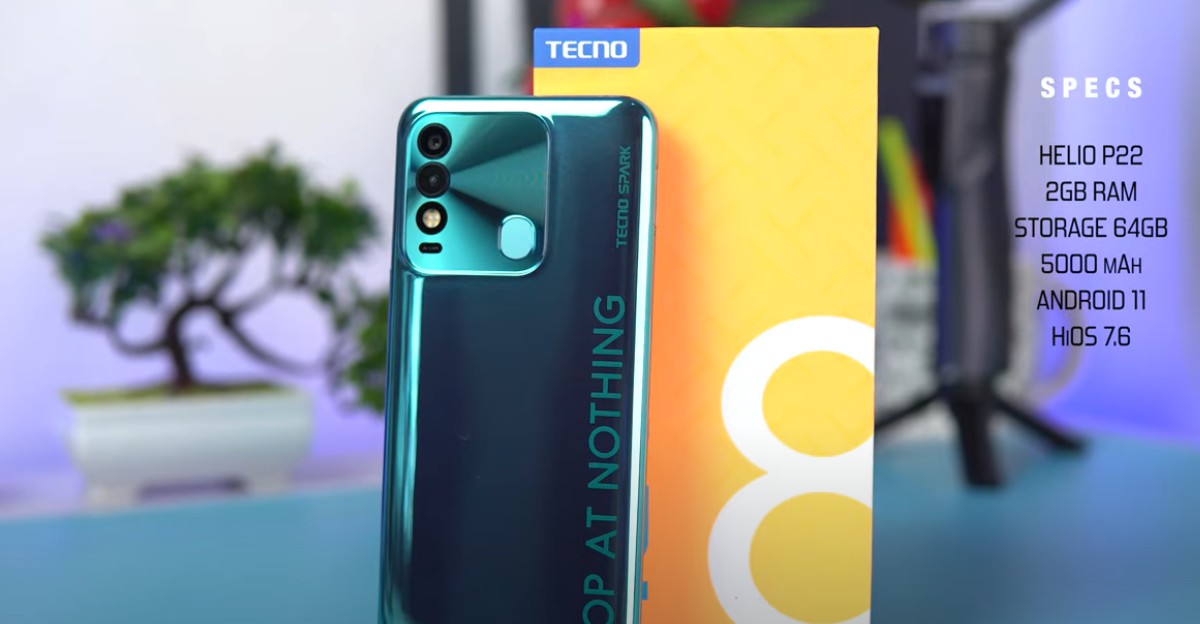 A Nigerian Tech YouTuber who shared a full review of the Spark 8 on YouTube said the phone is priced at N55,000 in Nigeria, an equivalent of about $134 US Dollars. The model has Tecno’s new “STOP AT NOTHING” brand slogan slapped on the rear of the phone, and even though multiple colors should be available, we are not able to deduced them yet.